OONI LAUDS AREGBESOLA @ 63, CALLS HIM AN EPITOME OF LOYALTY

IN QUEST FOR THE TRUE RELIGION (1) By Aare Kola Oyefeso

A Senior Advocate of Nigeria, Chief Olusola Oke who was the Gubernitorial candidate of Alliance for Democracy (AD) during the last election in Ondo state has lamented that the state Governor, Arakunrin Oluwarotimi Akeredolu, SAN has not treated him and his supporters fairly since they joined the All […]

As the economy of the Nigerian nation gets harder and foods and allied issues locate the front burners, Federal University of Agriculture, Abeokuta (FUNAAB) Ogun state is set to address issues pertaining to foods, essentially to proffering solutions to them. This University, according to its convocation programmes has […]

The Federal Operations Unit (FOU) Zone ‘C’ of Nigeria Customs Service in Owerri has confiscated 12 illegally imported cars and contraband with Duty Paid Value (DPV) of N240 million in the last one week. The Unit Controller, Mr. Kayode Olusemire, disclosed this on Friday in Benin while taking […]

Federal University of Agriculture, Abeokuta will be honouring Nobel Laureate, Prof. Wole Soyinka and a renowned Historian, Prof. Toyin Falola at its 26 Convocation Ceremony. According to the programme of activities lined up for the ceremony and signed by the Registrar, Dr. ‘Bola Adekola, the Seven (7) days […]

I HAVE NO HAND IN OSHIOMOLE’S PREDICAMENT – AMOSUN

The seemingly unresolvable brouhaha generating over the primary elections of the rulling party APC in Ogun State is taking a new dimension as accusations and counter accusations are the order of the day. In the wake of the invitation of the National Chairman of the party, Comrade Adams […]

The Executive Governor of Ekiti state, Dr Kayode Fayemi has resolved to complete all abandoned  projects and renovate dilapidated structures of the government in the state The Governor has also expressed the desire  of his administration to hand over all commercial ventures of the state to professionals who […]

YOU ARE LIARS  AND “ASS LICKERS” – Group replies aggrieved 26

A group known as Cerebral Round Table has described the 26 aggrieved Aspirants as a bunch of liars and “ass lickers” who are shamelessly acting the script of their master, Senator Ibikunle Amosun. The group based in Abeokuta led by Adeyemi Olusoga said it was unfortunate that some […]

Aggrieved members of All Progressive Comgress who contested for National Assembly in Ogun State have asked the Chairman of their party, Comrade Adams Oshiomole  to respect the mandate freely given to them by  members of the party during the Primaries held accross the state. Making this call at […] 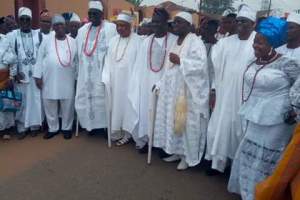 A Monarch in the Ngerian Nation has warned youths to steer clear of political violence at this electioneering period in Nigeria. Giving this warning at the recently concluded Sagamu Day Celebration, His Royal Majesty, Oba Babatunde Adewale Ajayi, Akarigbo and Paramount Ruler of Remoland said it was imperative […] 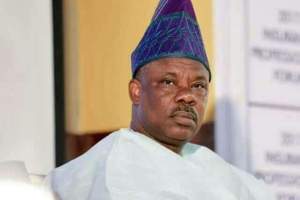 AMOSUN IS A DISAPPOINTMENT- L. P.

Amosun is a disappointment over his blind and impossible zoning arrangement of the  governorship of the state to Ogun West because himself and his cronies scuttled the same Ogun West plan of Otunba Gbenga Daniel. Making this declaration, Chairman of Labour Party, Abayomi Arabambi stated that APC leaders […]

WE WILL DEMOLISH MORE HOUSES TO PAVE WAY FOR DEVELOPMENT – Amosun

The Governor of Ogun state, Senator Ibikunle Amosun has disclosed that his Government was ready to demolish many more house in the nooks and crannies of the state in order to pave way for Development currently being embarked upon by his administration. Speaking at a Town Hall meeting […]

APC IS A PARTY OF DISGRUNTLED AND STRANGE BED FELLOWS

The ruling party in Nigeria has been described as a party of disgruntled elements and strange bed fellows who only came together to oust PDP but without any viable or workable manifestoes This statement was made by the Chairman of PDP, Ogun State, Alhaji Sikirulaihi Ogundele in our […]

KennyJ sets to change the phase of Nigerian music

Nigeria’s Rock and fast rising star, Kenny J is set to introduce a new phase into the Nigerian music with the video shoot of his dance hall head -turning song, Yelemama. Presently, his management team, Digest Records and the video handling team are perfecting plans for the […]