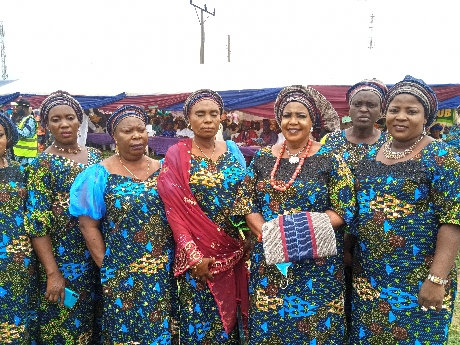 Governor of Ogun State, Prince Dapo Abiodun has tasked the newly installed Onipara of Ipara Remo to use his position to promote the wellbeing of his people and development of the town.

The Governor gave this charge on Thursday May 6, 2021 at the coronation and officially presentation of Staff of office to the Onipara held at Ipara town.

Abiodun who was represented at the occasion by the state Commissioner for Local Government and Chieftaincy Affairs enjoined him to a be father to all and promote peace and tranquillity in the town, because according to him that was important to engender development of the town.

The state Chief Executive also called on the people to join hands with the monarch in the administration and task of building the town, saying that the development of the town required the contributions of all and sundry in line with the government’s mantra of “building our future together”.

His Majesty, Oba Babatunde Adewale Ajayi, Akarigbo and Paramount Ruler of Remo kingdom, expressed delight as he formerly received the new Onipara of Ipara to the Remo Council of Obas.

Akarigbo also buttressed the position of Governor Abiodun by charging him to to be a father to all and concentrate on efforts that would promote the development of the town.

Ipara was founded by Oguola, who according to history was a great hunter and ruthless worrior with Royal blood in Ile Ife, the source of the Yoruba race. Oguola was said to have left Ife with his wife Oroye about 12 A.D. and settled at where is presently known as Ipara.

Ipara was said to be particularly a business centre for it was very popular for good palm-wine and bush meat. The town is today in the northern part of Remo Division. It is a one- road town. This is the old federal road from Lagos-Sagamu, Ode Remo and from Saapade to Ipara. Ipara has boundary with Fidiwo, a town in Ibsfemi Owode Local Government in the north and Isara and Ode-Remo in the west.

His Royal Highness, Oba Taiwo Taiwo, Amororo 11, in his acceptance speech extended a hand of fellowship to all Princes that contested against him, because according to him they remained of the same family with the sole intention and desires to work for the progress of the town.

“We are of the that same family with the same desires to work for the progress of our town, which is also paramount to my heart. Let us all come together to move the town to higher level”.

Oba Taiwo Taiwo who described the selection process that brought him to the throne of his ancestral father as transparent said his plans for the town was for peace to reign in order to be able to attract the much needed industries and other infrastructural development to the town. “This go with security of lives and properties which we have commenced by empowering the security agencies with motorcycles for patrol. We have also renovated the old Postal Agency. We have a temporary Police Post”, he stressed.

The traditional ruler said they had started making efforts to get the youths off the unemployment lane by establishment of industries and other avenues where they could be gainfully employed.

He used the opportunity to called on all well meaning and affluent indigenes, both home and in Diaspora, friends and well-wisher, investors to come and establish businesses in the town.

He thanked the Governor of the state, Prince Dapo Abiodun, Akarigbo and Paramount ruler of Remo kingdom, Oba Babatunde Ajayi, the Chairman of Remo North Local Government, Hon. Abiodun Somoye, the Royal families, the Baales, the security agencies which include amongst others Vigilante Group, members of Ipara-Remo Community Development Association (ICDA), particularly the Chairman, Prince Wole Somoye, as well as the entire sons and daughters of Ipara for their support.