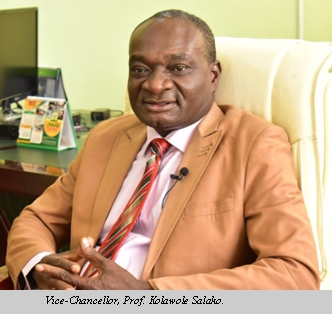 The Vice-Chancellor, Prof. Kolawole Salako has felicitated with the people of Ogun State as the Gateway State turns 45. Conveying his felicitation, during an interview with the Ogun State Television (OGTV), the Vice-Chancellor said, “I wish Ogun State well because naturally, I am a part of Ogun State. My mother was from Egbaland. So, I must definitely wish Ogun State well and I would want to encourage everyone, no matter what the difficulties are, no matter the short comings, no system is perfect, we should just get to know that we need to contribute our quota to the development of the state”.

Prof. Salako said “We should stop the mentality of, it is their business, let them go and do it. Everybody has a role to play in any organisation, in any system and that role must be positive, we should not assume that government must do everything although we will encourage government to do so for the development of the state and the people”. Fielding questions on Ogun State, being host to many tertiary institutions in the country and the impact on the quality of education, the Vice-Chancellor gave historical facts on education in Ogun State, stating that the state had remained the cradle of education in Nigeria as reflected with the first Newspaper ‘Iwe Iroyin’, which came from Ogun State.

According to him, more and more institutions are choosing Ogun State as their start-up base because of its peacful history, and because Ogun State can easily be linked from Lagos and Oyo States in terms of location and proximity to Benin Republic regarding international students. He further explained that the presence of higher institutions also brings economic and social gains to the state where they are located, disclosing that “There is nowhere in Nigeria where you have higher institutions and you don’t have economic gains because students are going to buy one thing or the other, it makes the state attractive to business people and brings about development structurally, in terms of hostels”.

Enumerating other gains to be derived from having higher institutions in the state, Prof. Salako said “Institutions also hold conferences, workshops and invite large number of people who will stay in hotels, so we boost the economy in terms of the hospitality industry. Some of them even go to the extent of visiting historical places like the Olumo Rock and Adire market. That also is another aspect in terms of economic boost, but I think the most important thing with regards to our institution is capacity building in the training of students. There are many of our graduates who live in Ogun State that have their own private and commercial farms, so the training we give them reflects in terms of the development of the state economically and politically, so having higher institutions concentrated in Ogun State is a plus”, the Vice-Chancellor added.