WEEP NOT FOR AMOSUN 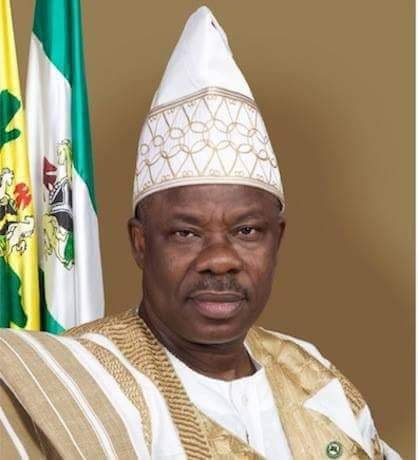 On May 29, 2011, before a mammoth crowd at the M. K. O. Abiola stadium, Abeokuta, Senator Ibikunle Oyelaja Amosun took the oath of office as the forth executive governor of Ogun State.

The expectant and jubilant crowd had come to witness what they thought was to be the beginning of a new dawn, considering the circumstances that existed in the state in the build up to the 2011 general elections. Conceivably, Amosun, the man of the moment, did not disappoint.

He gave hope to the people, assuring them that he would paddle the state’s canoe out of troubled waters. His words were soothing, comforting and reassuring. The people had not misplaced their trust. Or so they thought!

“It is time to rebuild our state. We have traversed the 236 wards in the 20 local government areas of the state thrice. I have walked the length and breadth of Ogun state: from lpokia to Ijebu Waterside, from Ake to Odogbolu; from Ifo to Ijebu-Ife and from Ita Iyalode to Abule Owu – the needs of our people are the same. The expectations of the people from their government are great.

The readiness of our people to be part of the rebuilding mission is overwhelming. It humbles me, its sobering, and I am eternally indebted. I will not squander this goodwill and confidence reposed in me”, Amosun told the cheering crowd.

However, as Amosun bows out finally, on May 29, 2019, it can be said without any fear of contradiction that, contrary to his promise, he squandered the goodwill and confidence that were reposed in him eight years earlier.
While committing himself to The Mission To Rebuild Ogun State, he assured the populace of sustained and focused development.

“In the mission to rebuild Ogun state, we cannot but acknowledge and salute the courage of our forbearers, icons and political mentors who have made today a reality.

We will build on the tradition of the late sage, Chief Obafemi Awolowo, the heritage of Chief Olabisi Onabanjo, the exemplary leadership of Chief Bisi Akande, the shining precepts of Aremo Olusegun Osoba and the political sagacity of the indefatigable Asiwaju Bola Ahmed Tinubu.

We also take pride and are further enamoured in the fact that prominent people from Ogun state were the pioneers and leading lights in virtually all the professions such as accountancy, law, medicine, architecture, the arts, international diplomacy, entrepreneurship and public administration.

The memories of the great exploits of these founding fathers have been blunted by the challenges of the recent past. The development of our state was not only arrested but misdirected. The clock stopped moving; while other states and other citizens made remarkable progress.

Our state, which had produced the best and the brightest, and which pioneered and valued knowledge acquisition and dissemination, became the laughing stock in the country. It was only associated with negative things.

For the good people of Ogun State, a Daniel had indeed come to judgment.
Rather than build on the heritage of Chief Olabisi Onabanjo, who developed the state equitably, as he promised, Amosun ran a sectional government that concentrated infrastructural development in only one section of the state.

Unlike Osoba that emphasized the opening up of rural areas through electrification and provision of pipe borne water, Amosun almost completely abandoned the rural areas throughout his eight years tenure. Worse still, the same Osoba, Tinubu, and Akande, who he eulogized in his acceptance speech eight years earlier, soon became his enemies.

He saw nothing good in any of them, assassinated their characters and did everything to upturn their leadership. Even in death, he fought Chief Olabisi Onabanjo, whose widow, Madam Lucia Onbanjo, 93, did not enjoy any recognition during Amosun’s tenure.
Worse still, Amosun not only arrested the development of Ogun State, he also misdirected it.

The Local Government Councils, the closest to the people, which should have brought development closer to them, were totally emasculated; their funds completely diverted through a fraudulent Joint Account legislation which he fraudulently made the Ogun State House of Assembly enact. The third tier of government was just an appendage of (the Commissioner for Local Government and Chieftaincy Affairs at the state Capital.)

Amosun erroneously took the construction of flyovers to mean development. That is the most visible project he executed in his eight years in office, constructing them where they are not needed in most cases. It is a total misdirection of governance, with flyovers flying over nothing.

The greatest development that Ogun State could have enjoyed was the Dangote refinery, which was billed to be sited in Olokoola, Ogun Waterside Local Government Area. With a potential twenty-five thousand job opportunities and developments that would have substantially improved the internally generated revenue of the state, the project was bound to be a harbinger of more developments. But Amosun frustrated the Dangote Group until it relocated the project to Lagos State, arresting development in Ogun state.

We will not only tolerate but encourage constructive criticisms from all and sundry. That is the hallmark of democracy. We do not believe that we know it all. And we will be the first to admit our mistakes, whenever we commit them”.

In the saddle, however, rather than tolerate and encourage criticism, he detested it; anyone with dissenting views was an enemy.

He had a thin skin for criticism; rather than run an inclusive government, he ran an exclusive government; he was the oracle who knew it all. His maxim was; Iyiowu e wi, tinu mi ni ma se (You will have your say but I will always have my way). Amosun ruled like an emperor.

When everyone told Amosun that his ‘Model Schools’ pet project was a misplaced priority, he told them that he knew what they knew not, acting God when he told the angels that he would create man and they expressed displeasure about it.

He embarked on the construction of twenty-six Model Schools but eight years after, most of them remain in varying stages of incompletion and abandonment; the few completed are lying empty, serving no purpose, after supposedly pumping one billion naira (minimum) of the scarce resources of the state into each of them.

Funds sunk into the project would have positively turned around the fortunes of many existing public schools and make them model in the true sense of the word. But we know why the emperor would not listen to wise counsel – the projects were conduit pipes to satiate his kleptomaniac tendency.

Power intoxicates, no doubt, but Amosun was completely consumed by power. When he sacked Labour Union leaders and every rational person, including royal fathers, appealed to him to rescind the decision, he only bared his fangs more.

He promised to create 10,000 employments in the state within his first 100 days in office, but sacked those employed by his predecessor immediately he was sworn-in. In his eight years tenure, unemployment rose astronomically.

His last minute employment of one hundred doctors, nurses and other health workers, was a drop of water in the ocean, it came too late. At the peak of his intoxication, he called the state Civil Servants ‘brainless’.

Amosun validates the position of those who postulate that seekers of public offices should be subjected to psychiatric tests. Or how else can we explain his last minute appointments, contracts and sundry issues, when, eight years earlier, he said that: We will take stock of what we inherited from the previous administration, review them and determine their relevance to our goals.

Unviable projects or projects designed to score cheap political points will be scrapped, so will all agencies and programmes with doubtful output and benefits.

Let me assure the good people of Ogun state that all illegal deals and last minute abuse of power by the last administration will not go un-reviewed. We will scrutinise all that has been done and then act in the best public interest.

We do realise that we will be faced with the painful duty of explaining to our people why such agencies and programmes have to be streamlined, but we shall be fair and just in all our decisions.

Curiously, the same man is doing the exact things he warned the then outgoing Otunba Gbenga Daniel led administration against.

Femi Ogbonnikan, in an article in THIS DAY, wrote: “Ibikunle Amosun is busy making appointments, promotions and secret recruitment of his cronies into the Civil Service’s top positions.

Few days ago he announced a Governing Council and Vice Chancellor for a University that was yet to admit students. He followed later with the appointment of about 18 Permanent Secretaries and two General Managers to the State-owned media organizations

The Governor is reportedly busy selling lands and awarding phony contracts, while exerting pressure on financial institutions to grant last-minute loans and overdrafts.

Many property owners who felt threatened by primitive acquisition of the departing governor have taken newspaper adverts to warn about buyers who may want to buy lands already sold to them by the Governor.

They alleged the governor wanted to forcefully take over their lands, for which they already paid hundreds of millions of naira into the state covers, and resell to unsuspecting members of the public”

Amosun waged wars on the state’s employees with his arbitrary deductions in salaries, unpaid counterpart funding of pensions; unpaid contributory pensions; gratuities, unpaid cooperative savings deductions of both public and civil servants in the state, culminating in low morale.

The workers of Tai Solarin College of Education were unpaid for 30 months, 49 of them passing on to the great beyond, mostly because they could ill afford medicare.

It will be unfair to say that Amosun was a total failure. He constructed good roads, although at criminally exorbitant prizes. However, he will be bequeathing to his successor, a plethora of uncompleted projects, most of them ill conceived. They were just drain pipes for the emperor.

As Amosun exits office as governor, he would soon discover that he is lonely and empty. For him, the evils that men do, lives with them. He will be a good reference material in ‘How not to squander goodwill’. He will soon come to terms with the reality that most of those who hailed him while he wallowed in self-delusion did so for what they would gain from him and through him. They will soon desert him. He alone will be answerable for his deeds and misdeeds while in office. Whatever the consequences that come his way, he deserves it all. They are self-imposed consequences. No one should pity him when nemesis catches up with him. Weep not for Amosun.