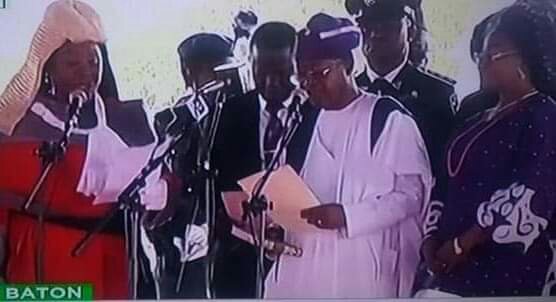 The newly sworn in Governor of the state of Osun, Alhaji Adegboyega Oyetola has promised that his administration would mark a new beginning in the state as he would ensure that the people of the state enjoy positive effects of the progressive government in the state.
He stated his administration would ensure prompt payment of workers’ salaries and also increase the revenue base, job creation, boost agriculture and food security as well as accessible health and qualitative education.

While thanking Buhari for his support for the state and the party, Oyetola said Osun was ready for the “next level. My administration will promote growth, job creation, social protection and upgrade in standard of living of the people,’’ Oyetola said.

Alhaji Adegboyega Oyetola has been sworn in as the governor of Osun State.

Oyetola, who won the September 22 governorship election on the platform of the All Progressives Congress (APC), was sworn in at Osogbo City Stadium, on Tuesday in Osogbo.
He arrived at the venue with his wife , Kafayat and children at 11:40 am.
The Chief Judge, Hon. Justice Oyobola Adepele-Ojo, administered oath of office on Oyetola at 1:02pm.
His deputy, Benedict Alabi, took oath of office at 12:55 pm.
Oyetola took over from Rauf Aregbesola, who came into power on November 27, 2010.

Aregbesola came to power after the Court of Appeal sitting in Ibadan, sacked his predecessor, Prince Olagunsoye Oyinlola, who had spent three and a half years of his second term in office.”
In his goodwill message, President Muhammadu Buhari urged Oyetola to rule with human face and with the fear of God.
The President, who was represented by Mr Boss Mustapha, the Secretary to the Government of the Federation (SGF), also urged him to be a governor for all.
Buhari said the peaceful transition from one government to another was a demonstration that Nigeria democracy had matured.

The president commended the people of the state for conducting themselves peacefully during the governorship election in spite of the hitches, adding that the victory was for the people.
Buhari also commended Aregbesola for steering the ship of the state in the right direction in the last eight years and for handing over power to another APC governor.
The president, however, said that Federal Government was committed to the completion of various infrastructure projects in the state.

He said FG had supported the state in the area of health, housing, water, economy and education.
Also speaking, Asiwaju Bola Tinubu, the national leader of the ruling APC commended Aregbesola for his achievements while in office.

“This is not a mere achievement, and we pledge our total support, both of us in office or out of office for the continuity of the progressive government established by President Muhammadu Buhari.

“And we are not going back to greed, selfishness and corruption that held back our progress”.
Tinubu, however urged Oyetola to embark on the same path that gave him honour to become the governor, adding that the party was solidly behind him.

Oyetola, a former Chief of Staff to immediate past governor, Rauf Aregbesola for eight years is a native of Iragbiji in Boripe Local Government Area of the state.
Born on September 29, 1954, Oyetola bagged Bachelor of Science degree in Insurance in 1978 from University of Lagos, and a Master of Business Administration in 1999 at the same University.
Oyetola defeated the candidate of Peoples Democratic Party (PDP), Senator Ademola Adeleke, during the governorship election.

Oyetola scored 255,505 votes to defeat Adeleke, who polled 255, 023 votes.
The journey of Oyetola to the governorship seat started on July 20, when he won the party’s governorship ticket.
He scored 127,017 votes to defeat other 16 aspirants who participated in the direct primary held in Osogbo.
NAN reports that APC governors at the event were Akinwumi Ambode of Lagos, Abiola Ajimobi of Oyo, Abdullahi Ganduje of Kano, Kayode Fayemi of Ekiti, Rotimi Akeredolu of Ondo and Yayaha Bello of Kogi.